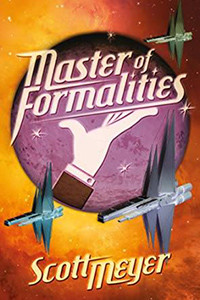 Even when finding oneself engaged in interstellar war, good form must be observed. Our story is set thousands of years after the Terran Exodus, where two powerful, planet-dominating families—the elegant House Jakabitus and the less refined Hahn Empire—have reached a critical point in their generations-long war. Master Hennik, the Hahn ruler’s only son, has been captured, and the disposition of his internment may represent a last and welcome chance for peace.

Enter Wollard, the impeccably distinguished and impossibly correct Master of Formalities for House Jakabitus. When he suggests that Master Hennik be taken in as a ward of the House, certain complications arise. Wollard believes utterly and devotedly in adhering to rules and good etiquette. But how does one inform the ruler of a planet that you are claiming his son as your own—and still create enough goodwill to deescalate an intergalactic war?

“Master of Formalities takes us to the future and out into the galaxy, but the story within these pages is far from alien – it’s about as human as you can get. Add into this Meyer’s typical humourous writing style and it’s pretty easy to get drawn in and swept along for the ride.”